Jolie Luba grew up in São Paulo, Brazil. When one of her two brothers joined a Waldorf kindergarten, the whole family was drawn to Anthroposophy in different ways. Jolie received her degree from the University of São Paulo in Psychology, and she earned her Waldorf Early Childhood teaching certification from Casa de Cultura Três Fontes - Campinas, SP.  Jolie taught in WSA's kindergarten program from 2006 to 2012. Then, for two years, Jolie returned to Brazil to work in the public school system, offering continuing education lectures about Waldorf Education. She also directed Escola Jardim Primavera, a Waldorf initiative in Ubatuba, SP.   Jolie and her husband have a son who graduated from WSA, and he is now a high school senior applying for college. This is Jolie's fourth year at our Inman Park campus, teaching both a class for 2 to 4 years old and our Morning Garden program. Jolie enjoys working with children and adults alike, and she is also passionate about creating opportunities for adults to talk about death and dying, while reflecting on life and living. Her hobbies include dancing and skygazing. 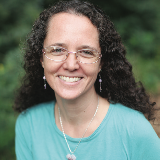