As human beings, we use our hands regularly in our daily lives. At Waldorf, the Handwork curriculum is broad and includes skills such as knitting, crocheting, hand sewing, embroidery, felting, paper crafts, pattern design, and machine sewing.

Many of the benefits of the Handwork program are obvious: hand-eye coordination; basic math skills such as counting, the four math processes, and basic geometry; the ability to understand and follow a process from concept to completion; and the ability to focus on a project for an extended period of time.

There are also more subtle rewards that complement these obvious benefits. Students must prepare and care for materials. Many of the created items have a practical use – a case for a flute, a needle book, a pair of socks. Design and color choice allow for individual creative expression. One of the most far-reaching benefits of Handwork class is the social aspect. While there are times when quiet is needed, such as when you are learning a new stitch, most of the time the atmosphere in the classroom is social and conversational, not unlike a quilting bee. Students learn to speak politely to one another. Throughout the process, respect is fostered.

At the Waldorf School of Atlanta all first graders learn how to knit. This basic skill uses both right and left hands, and brings a steady, calming rhythm to the younger child. Crocheting, which emphasizes the right or left hand, almost always follows in the second or third grade. Cross-stitch is paramount to fourth grade as the children begin crossing over from childhood to adolescence. In fifth grade, knitting in the round, used to make hats, mittens, and socks, is a three dimensional, mathematical activity leading up to critical thinking in the middle school. Long-term hand-sewing projects involving concepts, patterns, and mathematical computations are usually found in sixth or seventh grade. The eighth grade Handwork curriculum often involves machine sewing, which perfectly integrates the student's study of American History and the Industrial Revolution.

Our Handwork teacher is Lisa Roggow, assisted by Carol Bulmer.
Handwork Teacher:
Lisa Roggow has a Bachelor of Arts degree in Anthropology and Literature from New College in Sarasota, Florida. She worked in the book industry for several years, and came to The Waldorf School of Atlanta when she enrolled her daughter in the preschool/ kindergarten program in 1995. Lisa's handwork experience began in childhood, when she would take her mother's sewing and crochet scraps and fashion them into doll clothing. After the birth of her son in 1999, Lisa began leading a parent handwork group at the school. Later she worked in the handwork department, holding the assistant position for seven years. She became the lead handwork teacher at WSA in 2009.
Assistant Handwork Teacher:
As the child of a Navy pilot, Carol Allen Bulmer, grew up in many places including Japan. After retirement, her family settled in her father's hometown in rural Georgia. Here she spent the remainder of childhood growing up on a farm taking care of animals and pursuing a variety of artistic interests including a wide array of handwork skills. Carol learned many, if not most, of these skills from her grandmother and other family members.

Carol attended the University of Georgia studying studio arts and specializing in jewelry and metalwork. She also studied art education and regular education becoming certified in the state of Georgia in both areas. After teaching art and regular education in public schools for 11 years, Carol took time to earn her Masters degree in educational psychology. During this time her two boys started Morning Garden and continued through the grade school. Carol began working at the Waldorf School of Atlanta in 2009 as Handwork Assistant Teacher. She has a son in the eighth grade and a Waldorf "graduate" who is now a ninth grader at Academe of the Oaks. Other interests include gardening, animal rescue and enjoying the outdoors. 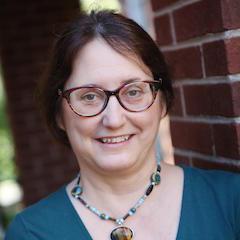