Sixth grade is the gateway to pre-adolescence. The curriculum offers firm academic grounding in math, composition, and science, along with memorable depictions of cultural cause and effect: Arthurian legend and the rise and fall of the Roman Empire, medieval society and the Crusades. Students begin to structure and participate in scientific experiments on light, heat, magnetism and electricity while the study of mathematics incorporates business math and the principles of economics.

As middle schoolers, students in the sixth grade join either the Strings Orchestra or the Recorder Ensemble and participate in the Middle School Choir; experiences that enrich the school year through multiple musical performances. 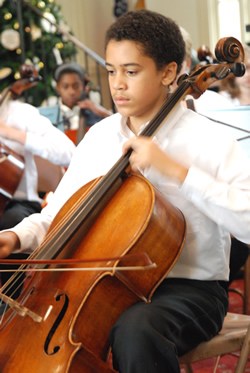 Strings & Recorders
Music permeates the Waldorf curriculum, weaving throughout the school day and school year. Every Waldorf student studies music and has the opportunity to perform. As students reach the middle school, their musical talents are more sophisticated, as is their ability to practice and perform as a group.

The Waldorf School of Atlanta Strings Orchestra includes all students from the sixth, seventh and eighth grades who play violin, viola, cello, base and harp. In similar fashion, middle school students who play soprano, descant, treble, tenor and bass recorders become part of the Recorder Ensemble. Members of our music faculty work with students individually, with each grade, and with the orchestra and ensemble to prepare for group performances.

Both the school and our greater community are gifted with inspired and inspiring musical performances throughout the year – at assemblies, holiday concerts, and community events – culminating in our Spring Concert which features musical offerings from individual students, duets and quartets, as well as the strings orchestra and recorder ensemble.
Geology & Astronomy
The Waldorf experience embraces opportunities for students to absorb information via multiple methods. One example of this is the alignment of class trips with the curriculum. Students in Grade Six complete their study of geology with an exciting caving expedition, journeying deep into underground passages to discern the natural forces that create and continue to shift the earth's surface. Then, as the class shifts its focus to the study of astronomy, students travel far outside the lights of the city to search the night sky for constellations, recounting their ancient stories learned in earlier years.
Light, Sound & Motion
For several days each year, the windows and door of the Sixth Grade classroom are swathed in back fabric to prevent natural light from seeping in. Thus the stage is set for a series of experiments on the nature of light. Throughout the physics block – which also includes combustion and Newton's laws of motion – students rotate between lectures and lively hands-on learning designed to fully engage the mind and senses. Students learn to employ the scientific method, which in a Waldorf classroom embodies a very keen sense of personal observation and reaction.
Main Lessons
History: Rome: Founding of Rome through the monarchy, republic, and empire. Famous and infamous individuals: Hannibal, Julius Caesar, Marc Antony, and Caesar Augustus. The life of Jesus. The decline of Rome and the Barbarian Migrations. Studies include maps, recitations in Latin, biographical portraits, debates. Emphasis on causal thinking. Medieval society: the cloister, the castle and city. Arthurian legends. Monasticism and the rise of the church. Creation of Feudalism. The Crusades. Biographies may include Mohammed and Islam, Charlemagne, and William the Conqueror.