The Waldorf School of Atlanta (WSA) was founded in 1986. Waldorf Education celebrated it's 100-year worldwide anniversary in 2019, and WSA has over three decades of expanding the worldwide movement of Waldorf education in Atlanta. We believe there is much to celebrate about Waldorf Education, and the Waldorf School of Atlanta's history and community.

In 1980, Katie Reily, a speech therapist and educator, attended a eurythmy performance by a traveling troupe from Stuttgart. A few months later, she visited a small Waldorf kindergarten in the mountains of north Georgia. Struck by the nobility and originality of Rudolf Steiner, the father and founder of Waldorf Education in 1919, Katie began to research his lectures and share her discoveries in adult study groups in Atlanta. It was Katie's knowledge, enthusiasm, and dedication that nurtured Atlanta's first Waldorf community of parents. As a new mother, she also extended the gift of Waldorf education to the young children in her Grant Park neighborhood.

Eventually convinced that the need and understanding were present to support a Waldorf kindergarten, Katie invited Susan Jones, the accomplished teacher of that small rural school in Young Harris, Georgia to move to Atlanta to teach. With Katie's vision, Susan's experience, and the support of devoted parents, the first Atlanta Waldorf kindergarten, The Children's Garden, was established in 1986.

Along with the establishment of The Children's Garden, The Georgia Waldorf Association, a nonprofit organization, was founded. Its primary purpose was to build community awareness of Waldorf education in an effort to organize and support a Waldorf school in Atlanta. An Association newsletter was first published in 1986, esteemed Waldorf lecturers were sponsored, and various workshops were offered. As of October 1987, the Association boasted fifty members.

The kindergarten program expanded in 1991 to include a three-day class for younger children (co-taught by Theresa Moreno and Annamay Keeney); Annie Sommerville-Hall and Cheri Munske, among others, continued the Waldorf playgroup tradition by offering morning programs for very young children in their homes. In 1992, our school, and particularly its faithful parents, took another inspired step and established our first Grade 1 class: Susan Jones was the school's founding grades teacher.

The name of our school was changed to The Waldorf School of Atlanta in 1993, to reflect the growth of our community and our aspirations for the future. Susan Jones stayed with her pioneer class through Grade 5.

The formative years of this school were impelled by three essential convictions: Susan stood for the pedagogy, Katie stood for the community, and the parents stood for their children. These elements represent, in essence, the head, the heart, and the hands: those aspects of the human being which Steiner's education faithfully seeks to develop in its students. 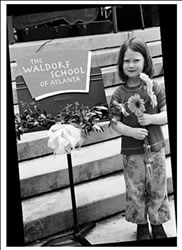